Educate before you medicate 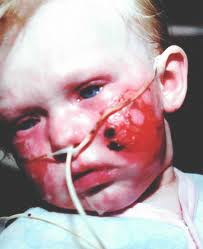 Julie was 10 months old when she had a grandmal seizure. She was prescribed Phenobarbital to control idiopathic epilepsy. We asked the doctor about side effects and we were told drowsiness. That was much easier then watching my baby seize. Two weeks on August 18, 1994, we learned about Stevens-Johnson Syndrome.

Julie awoke one morning with her right eye swollen shut. By that evening her left eye swelled also and the right one was now completely shut. My mother thought the baby had an allergy. As the night went on she developed a high fever. I rocked her all night. The next morning I took her to the doctor who diagnosed her with a viral exanthem and later that day changed the diagnosis to chicken pox.

She continued to worsen as the day went on. She could no longer take a bottle as her mouth was filled with blisters and she continued to run a high fever. I worried that since she was not taking any liquid she would dehydrate. I called the hospital and was told to wait another 6 hours and if she still did not have a wet diaper by then to bring her in. When I took her to the emergency room she was dehydrated. They started an IV and gave her the missed dose of Phenobarbital from the night before. She received another dose that night and another the next day. She had blisters from dime size to half dollar. Her face was unrecognizable. She looked like she had been deep fried. Four days later she was diagnosed with SJS, secondary to Phenobarbital. I remember how happy I was at the time thinking, finally we know what is wrong. Now she can get better. Then a doctor told me, “Jean this is not a good thing.”

My sisters went to the medical library and got the only information they had on SJS. No one should have to hunt for this information. It should be made readily available to all patients and families who experience this nightmare. We could only find one article. Julie was debrided every day in the burn unit and wrapped in bandages. She was on morphine for the pain and had a feeding tube for nutrition. I was given one lesson the day she was released from the hospital on how to insert a N. G. Tube through her nose and into her stomach just before we left the hospital.

Her lungs collapsed and she has a swallow disorder. She did not hear until she was 18 months old. The blisters in her ears had ruptured and wept over her eardrums. They had to be removed by an Ear nose and throat doctor. On her first Birthday I was told my baby was going blind. I watched in horror as doctors performed traumatic procedures on my daughter to save her sight. Glass rods swept under her eyelids as I held her down. I wasn’t supposed to let anything bad happen to my child no less hold her down while someone hurt her. She was terrified of everyone. Julie did lose all of her sight in her right eye and has low vision in her left. She has dry eye syndrome, photophobia and has had 8 lid entropian surgeries. She has attended preschool for blind children. We almost lost her several times. One night my entire family came up to the hospital to say good bye to her. Somehow Julie survived. It was a miracle, I thank God she is still with us, She does not look the same, but will always be my beautiful baby. I love her with all my heart.

The seizures came back full force and Julie was in a coma after 44 seizures in one day the longest lasting 50 minutes. Thank God, movie producer Jim Abrahams heard about Julie and with his help she was put on the Ketogenic Diet. This is a high fat diet requiring everything she ate be measured to the nearest gram. After 2 years, it paid off. She is DRUG & SEIZURE FREE! I only wish the diet had been offered to us in the beginning.

We took Julie to the Boston Foundation for Sight when she was 4 years old. She was fitted for the scleral contact lens. It was one of the best things we ever did. Julie was seen by Dr. Perry Rosenthal and Dr. Janice Cotter at BFS. Dr. Rosenthal developed these wonderful contact lenses that have proven to help many SJS patients. It did help Julie. Her photophobia was reduced by 50%. She is much more comfortable as it bathes her eyes all day long and relieves the dry eye syndrome. She asks me to put her contacts in. One night after her contacts were out she told me “Mommy my eyes hurt”. Julie never realized she was in pain until she got the scleral lens. I asked her if she wanted to wear her contacts or her glasses. She said her contacts. I asked her why and she told me because she can see with them and her eyes feel good. Pain was a way of life to her. It is a miracle. I will never be able to thank Dr. Rosenthal and Dr. Cotter enough. While we were there we met Joe Zienowicz. He had SJS in 1995 and is legally BLIND. After receiving the scleral lens, Joe gave us a ride from Boston to New Jersey where we met several other families whose children suffered severe eye involvement from SJS. After seeing Julie and Joe they, too, are getting the scleral lens. For more information about the Boston Foundation for Sight please call 781-726-7337, or visit their website by clicking here: The Boston Foundation for Sight website

We started the Stevens Johnson Syndrome Foundation – Julie Foundation for Allergic Drug Reactions, a nonprofit organization to provide information that we struggled so hard to find. Adverse Drug Reactions are the 4th leading cause of death in the United States, yet less the 1% of these reactions are reported to the FDA. We are also working on medical research into SJS/TEN.

I was told we would never hear of another person with SJS. We have reached around the world with our SJS Support Group, and have sent out hundreds of information packets with information that was not readily available to us when Julie was diagnosed with SJS. The SJS Foundation designed the Facts about Stevens- Johnson Syndrome information sheet, please feel free to download and share with your family and friends, http://www.sjsupport.org/pdf/SJS_factsheet.pdf. No one should have to search for information while their loved one is fighting to survive SJS. SJS is not as RARE as we were led to believe. You are all in our thoughts and prayers every day. 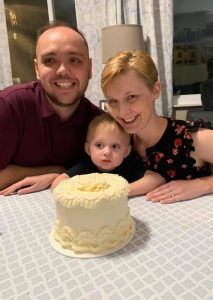